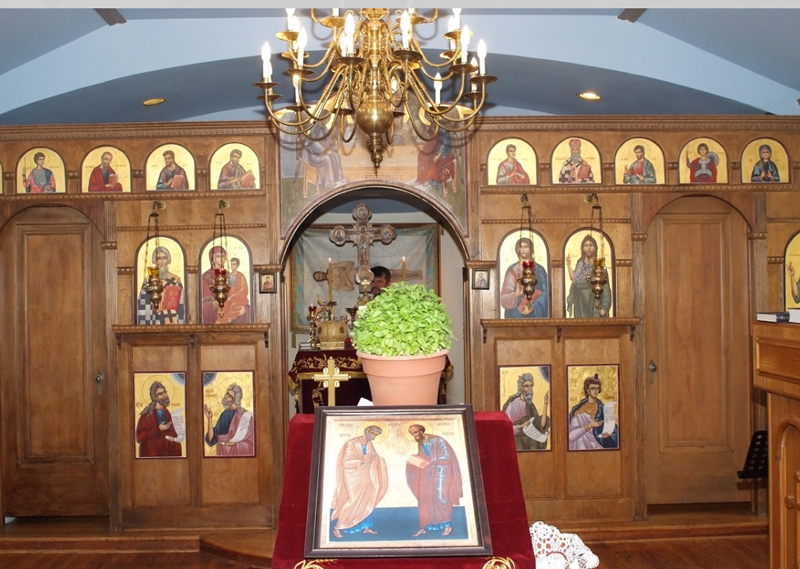 The Origin of the Church

Due to the increased population of Serbs and the inability of the church in Hamilton to dedicate enough attention to all the faithful in Oakville, quite spontaneously in a conversation with Father Stevo Stojisavljević, the parish priest from Hamilton, the idea of Oakville getting its own church was born.

Realizing the importance of this blessing of having their own church in their town, the Serbs from Oakville organized themselves on their own initiative and in 1983 bought a 10-acre plot of land on which to build the Church of the Holy Apostles Saints Peter and Paul. The people organized themselves during a difficult time with a noble goal in mind – to be able to gather, pray to God, to assemble, socialize, and preserve tradition.

From that time until today, the Serbian church in Oakville has sustained its mission, so much so that it has an extremely important significance to local Serbs because it is both a gathering place during the liturgy and for socializing during all holidays.

Primary Goal of the Church

The priorities of the church in Oakville are, above all, spiritual and cultural development – i.e., preservation of the traditions of the Serbian people with the aim that people do not forget their language and customs.

The church administration, headed by Dragan Prostran and Father Dragomir, unselfishly contributes to keeping the church in Oakville alive. These are people who work generously and selflessly for the benefit of the church.

On October 1, 2019, Protopresbyter-Stavrofor Dragomir Ninković, by the decision of His Grace Bishop of Canada Dr. Mitrophan, was appointed as the parish priest for the Oakville congregation of the Holy Apostles Saints Peter and Paul Church.

Liturgies are held in the church every Sunday and on holidays, during which Father Dragomir preaches a beautiful sermon about Orthodox Christianity and his people so that the believers feel proud to be Serbian.

However, the church is closed on other days because the priest lives 70 kilometres away from the church in Oakville. This leaves room for more thoughts on the existence of a home for the parish priest in the future or any other solution related to the residency of the priest near the church. Because when a priest lives beside the church, then the church lives for its believers every day. People would be free to come to the church whenever they wanted because they would know that it is always open.

However, for over ten years, the church property has been in question because the government has some other plans.

The Canadian Diocese, the church administration, President Dragan Prostran, and Father Dragomir fought hard to preserve the church in Oakville. The solution to this long-standing problem is in sight, and everyone hopes that with God's help, everything will go as planned.

The Circle of Serbian Sisters, headed by President Mirjana Janković, also functions within the church.

The diligent hands of hardworking women are always there for the preparation of various celebrations, slavas, Christmas Eve and Christmas festivities, Easter celebrations, but also memorial services.

The Folk Dance Ensemble “Kosovski Božuri” at the church in Oakville was founded in 1984 and consists of nearly eighty members, aged 4 to 20. Their members, full of joyful dancing and singing, share in the mission of preserving Serbian folk dance traditions in North America. The initiative is to create various cultural and educational programs that will spiritually enrich young people and help them better understand their faith, history, culture, and tradition. In this way, young people become good members of society and spread a positive image of our community, faith, and the Serbian nation to the world around us. Despite the current pandemic, volunteers and children working with this special organization have still managed to start on the work for the 2020/21 season.

With adherence to all prescribed measures, because children’s safety is most important, the Božuri continue to work with the expert instructors Teodora Prostran and Ljubomir Luka Popović.

Since we are far from the motherland, all these people are working together to preserve the spirit of the homeland in a foreign land, which is an act worthy of respect.

You can find out more about the Orthodox Church in Oakville at: www.serbianchurchoakville.ca

With your donation, you will contribute to the continued existence of the magazine as well as the maintenance of the website. Your name or company name will be included on our page “Our Sponsors”. If you wish you may also choose to remain anonymous (be sure to select the option to donate anonymously in the application). Thank you for considering to support SAN.