About Serbian culture and people in Canada and around the world

SAN is about the dream of many Serbian people to live life without war and economic and political turbulences. To make a new home and a new life in Canada. To get opportunities.

To make a dream come true.

SAN’s mission is to maintain and embrace Serbian ethnic identity, language, culture, history, art, and traditions outside of Serbia.

SAN’s mission is to write about Canada and the society that we live in, and to assist immigrants of Serbian origin to adjust to Canadian society.

SAN’s mission is to promote Serbia and Serbian heritage to Canadians.

SAN-CAH (Serbian Canadian Magazine - СеверноАмеричке новине) is a magazine in the Serbian language for people of Serbian origin and for the Serbian community in Canada. SAN’s audience are also people from ex -Yugoslavia.

SAN magazine was launched in November 2014 in Toronto by a group of enthusiasts, intellectuals, writers and former journalists of Serbian origin in Canada. The first issue was published in July 2015 and from that time continued continues to be printed quarterly. As of  2018, the magazine is also available online.

In Canada, there is a significant number of immigrants who speak the Serbian language. SAN writes about our new country, Canada, and the country we originated from, Serbia.

The magazine comes out quarterly: in January, April, July, and October. The printed publication can be ordered through a yearly subscription, and the digital magazine is available for reading through the subscription on the website.

SAN writes about Serbian traditions, culture, history, art, and language. There is a special section about the Serbian community in Canada, with reports about the different organizations and groups, and interviews with successful people of Serbian origin in North America. SAN also writes about Canadian society, history, lifestyle, business, career, education, health, and travel.

The wish of the editorial staff is for SAN, in its own modest way—in addition to current articles related to the life of Balkan emigrants in North America—satisfy some of our intellectual and spiritual needs through informative and intriguing points of view on current themes, through articles about society, history, and traditions; through book reviews, plays or films; as well as through interviews with our successful fellow citizens of Serbian origin in North America. SAN would like to contribute to connecting people in the Serbian community in Canada, the exchange of information, and the preservation of our language and culture. Our idea and ambition is for SAN to contribute to the active inclusion of second and third generations of our children in the Serbian community and influence the improvement of their knowledge of Serbian language, culture, and traditions. Also, through the rubrics of Canadian society, employment, careers, and finances, SAN wishes to help newcomers to Canada better and more quickly and easily acclimatize to their new society.

As of 2015, SAN is a member of the National Ethnic Press and Media Council of Canada.

SAN can be purchased through the subscription and in Serbian stores in Toronto, Mississauga, Calgary, Montreal, and Vancouver. The magazine is also distributed at community events. SAN is always looking for new distribution locations.

SAN’s editorial team is made up of enthusiasts who volunteer for this sociocultural project of great importance for the Serbian community of Canada and internationally. This project came to life primarily thanks to the selfless work of the team members who work for SAN with no financial compensation.

Besides the regular members of the editorial team, SAN has been filled with the works of over 30 contributors from different parts of Canada, Serbia, the former Yugoslavia, and the United States. SAN contributors are of all ages, and retirees make a significant contribution. We pay particular attention to our young contributors, who have joined the work of the team as second and third generations born in the diaspora.

SAN is not just a magazine—it has become an important social group for the Serbian community in Canada, one in which people have gathered around the idea to preserve Serbian cultural identity and language in the diaspora. It is also unique in that it stimulates and invites its readers to write for SAN and collaborate in various ways. The members of SAN are connected by a great talent and love for writing. They share in common the love for the culture and heritage of the Serbian people, and the desire to preserve those values in the diaspora. The vision of the editorial team is for SAN Magazine to remain a testimony of the time in which we live, as well as of the community of Serbian immigrants in Canada.

Even though the members of SAN are not journalists by profession, the majority gained significant experience in Serbia working in publishing houses, on state television and radio, and as journalists, editors, and copyreaders. A few members of SAN are authors, with published books of poetry and prose.

The founder and Editor-in-Chief: Vesna Nedić

Snezana Ivkovic was awarded for "Life time services rendered to journalism and information industry" in the category Journalists! 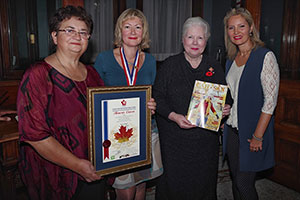 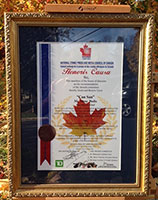 In the fall of 2016, from The Honourable Elizabeth Dowdeswell, Lieutenant Governor of Ontario, Representative of Her Majesty The Queen of Canada, SAN received an award for the best editorial concept and visual presentation among ethnic magazines in Ontario. 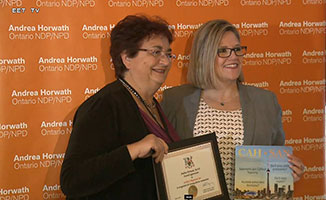 SAN Magazine invites all its readers to send in their comments, articles, interviews in Serbian as well as photograph and illustrations. All letters and written works must be signed with the author’s full name, address, and telephone number. The editorial staff of SAN Magazine reserves the right to edit and shorten articles, as well as to publish the written work in physical or electronic format or to not publish certain material. The author retains his/her copyright. Send your letters or written works to: sanmagazinecontact@gmail.com.

What SAN Can Offer to People Not of Serbian Origin

SAN writes about elements of Serbian heritage that could be interesting for non-Serbs. Reports about the different parts of Serbia and the former Yugoslavia could be very inspiring for Canadians to visit one day.

SAN also writes about trending topics in global and Canadian society, history, culture, health, business and career, lifestyle, travel and more, some of which have a special spice—the perspective of people who come from a different country and different society.

The magazine publishes interviews with successful and interesting people. Readers who do not speak Serbian can find selected articles from past and current issues translated in English, free on the website.

Become A SAN's Partner and Sponsor

There are different opportunities to sponsor SAN and/or advertise in our magazine and website, and expose your business or services to the niche market in the Serbian community and wider. You may visit our Advertise page and contact our marketing team to find out which advertising option works best for you and your business.

Thank you for your consideration in partnering with SAN!

With your donation, you will contribute to the continued existence of the magazine as well as the maintenance of the website. Your name or company name will be included on our page “Our Sponsors”. If you wish you may also choose to remain anonymous (be sure to select the option to donate anonymously in the application). Thank you for considering to support SAN.

WHERE TO FIND SAN?